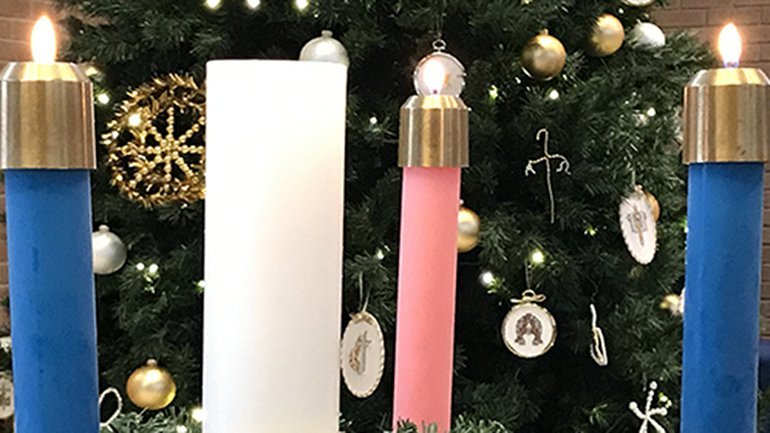 A shoot shall come out from the stump of Jesse, and a branch shall grow out of his roots.

Next time you are in St. Timothy’s sanctuary look up. Look up and to the right that is. Tucked away in the far corner, above the choir are four blue stained glass windows, our advent windows.

Among these four is in odd sight, a stump. It sits all alone, set upon a field of blue light. But this is no yule log, no husk of a Christmas tree; it is the “stump of Jesse.”

In ancient times before Jesus was born, before Rome was built on the banks of the Tiber, during the times of the royal kings of Israel, David sat on the throne in Jerusalem. It was God who promised King David that his family, his family tree that is, descended from his father Jesse, would rule forever. Years passed and the seat of David passed on to his son Solomon and from him to Rehoboam and so forth and through the years until the time of the prophet Isaiah. A funny thing happened along the way, however. The once mighty and faithful tree of David fell further and further from God. The kingdom weakened. Conquerors came and went. Until all that could be seen from the mighty glory of before was a poor measly stump of that royal family tree. Every hopeful, the prophet Isaiah proclaimed that one day God’s kingdom, promised through the line of Jesse, would once again return to glory.

And there the stump sat and waited as if in its own perpetual Advent. It was not until many centuries later that a shoot began to emerge. Jesus is born, descended from the house and lineage of David, and it is he, the true vine, who sends forth new branches, announces a new kingdom, and takes form in ways greater than any earthly king could ever imagine.

Back to the windows. Do not let your eyes remain on the blue. Let them travel. Follow the shoot that bursts forth from the stained glass stump. The green, full of vibrancy and life, travels all around our church. It snakes and weaves from one panel to the next surrounding all who are gathered in the reality of the all-encompassing love and mercy of our king, Jesus Christ, the true vine from the stump of Jesse.